Why I Stop Firefighters On The Street 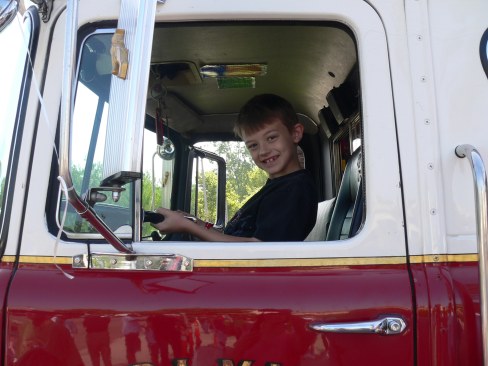 What is it about little boys and firetrucks?

There’s something about firefighters, isn’t there? When a firetruck races by, little kids get excited. I know my son always did. He always wanted to meet the firefighters and see the engine up close. Our local fire station has an annual pancake breakfast open house where the firefighters serve the community pancakes, sausage, coffee and orange juice and let the kids sit in the trucks.

Inside the firestation at the pancake breakfast, complete with balloons and badges.

Women in sitcoms seem to love firemen, don’t they? There seems to be a running gag about “hot firemen” and the calendars they put out. I personally have never seen one of these calendars in a store, but I don’t doubt that they exist out there somewhere.

After 9/11 especially, I think, firefighters captured the nation- and perhaps the world’s heart. Watching them fearlessly race into buildings they knew were in danger of collapsing to save people was an unbelievable act of courage and selflessness.

I grew up with firemen.

My Grandad was a fireman. 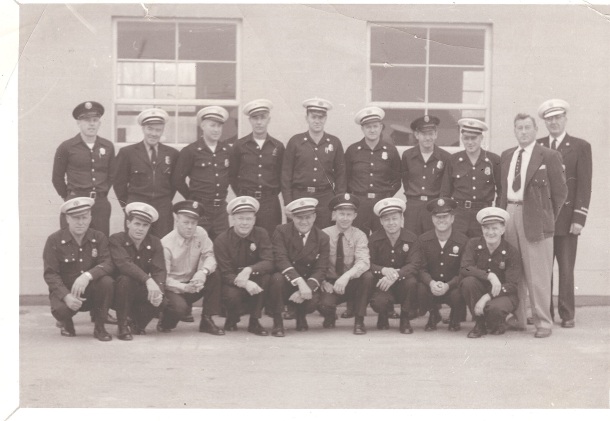 My Grandad is the tallest one in the back row.

Off to work, with his youngest at the door.

My uncles were fireman.

Uncle Mick, on the job.

When I was really little, I didn’t fully understand or appreciate my grandfather or my uncles’ jobs. What I knew about their jobs was they wore uniforms and their schedules dictated when we would have get-togethers in the family.

As I got older, I thought it was pretty neat that they were firemen. Firemen were cool. Firemen were brave. Firemen saved people and ran into burning buildings and delivered babies. My best friend, Kristi’s father was a fireman as well, and I got to visit the fire station and see where he worked and saw up close and personal what it was like to be there waiting for a call. That gave me a little insight of what their job was like when they weren’t on calls. That helped as well.

These days, a new generation of firefighters and paramedics is joining the ranks. 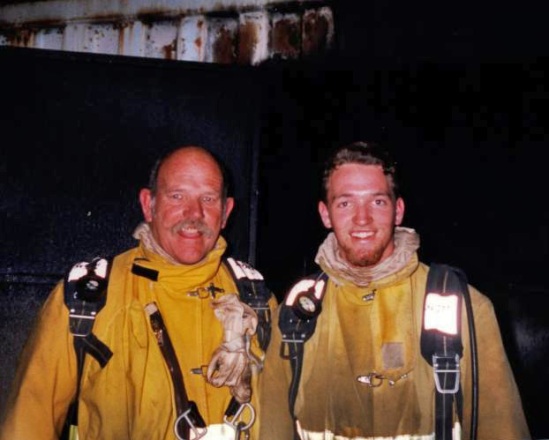 Uncle Mick and his son, my cousin Travis.

Uncle Randy and his son, my cousin Tyler.

In time, my appreciation grew. I don’t know if I’ve ever really sat with them and said, “You guys are awesome. Thanks for what you do.” The odd thing is, I tell firefighters in our neighborhood – ones I don’t even know. How is it that I haven’t told my own family?

So I’m telling them now.

Thanks Micky and Randy.

Thanks Travis and Tyler.

Thanks for fighting fires, saving lives, helping people. Thanks for helping the community. I’m proud to be your family, and every time I see a firetruck or a firefighter, I think of you guys and smile knowing I have firefighters in my family looking out for other people.

Posted in Family, Friends, Life, Traditions and tagged 9/11, family, firefighters, firestation, grandad, pancake breakfast, rescue, thank you, uncles. Bookmark the permalink.
← Week In Pictures – 2/19/12
Milestones – What Nobody Tells You When You Have A Baby →