RSS Feed
← Moving right along
Just for kicks (or, am I a glutton for punishment?) →

I have been touched by cancer in my lifetime. Thankfully, I haven’t had it myself, although I suppose I have no idea what the future holds…

The first time I was touched by cancer was when my uncle died. Just 10 days after I was born, I didn’t know til years later about his fight, but the very circumstances of my birth were affected by his death.

Later, there was my aunt, who fought (and triumphed over) breast cancer. More recently were my grandmother, who died of Leukemia, and my friend Diana who is a breast cancer survivor. Though we became friends after her fight was mostly won, her stories, her blogs, and her experiences she’s shared with me have touched me greatly. Hearing what a survivor goes through during and after really makes an impact on you. At least it did me.

Someone else I know is going through the fight right now. My brother’s soon-to-be sister-in-law, Jenn is fighting Hodgkins Lymphoma for the second time in 2 years. It horrifies me she has to do this AGAIN. She fought so valiantly the first time, and is doing so again. I have faith that she can kick it’s ass for good this time.

She’s been asking for people to help raise money to help fight cancer. Here’s some information.

I donated, but I also bought a t-shirt to show my support. Unfortunately there was a snag, and I got the wrong shirt initially, but the right one is finally here, and I wore it today. Here’s my picture: 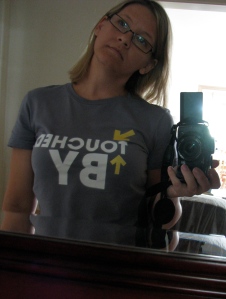 If you’ve been touched by cancer in any way, please take a moment to make a small difference. Perhaps you can send someone you know who’s survived or is in the fight a note of support, or baked cookies. Maybe it’s donating to an organization, whether it’s Stand Up to Cancer, or the Leukemia and Lymphoma Society. Or perhaps it’s participating in a fundraising event, like Light the Night, Relay for LIfe, The Avon Walk, or some other event. Do a search, look around. There’s plenty of opportunities to make a difference, and let’s hope that if anything ever touches us in a more personal way, that our friends and loved ones will Stand up as well.

Posted in 1. Bookmark the permalink.
← Moving right along
Just for kicks (or, am I a glutton for punishment?) →